I got mail from the Barefoot Contessa

Big, swoonish, tried-to-play-it-cool-and-bombed moment: In September, I interviewed Ina Garten, the Barefoot Contessa. I drooled all over her through the phone, sent her Hatch chiles, exchanged emails with her, and completely lost my mind. She’s the patron saint of my kitchen, and she’s also in town to sign her new cookbook in Scottsdale tomorrow (Wednesday). You can read my story about our chat right here. And you’ll want to, because she divulges the secret to a happy marriage, which is so small, and so right, that I’m emulating my relationship AND my dinners after her now. I know. It’s a lot.

Maybe you’d need Justin Timberlake to make your brain turn to mush, or LeBron James, or the Countess on Real Housewives. (Why, people, why?) But I lost my head over Ina.

During our chat, we talked about furniture and brownies and that dishy hunk T.R. who is always on her show. (He let me be his friend on Facebook. Told you. I’m obsessed.) Anyway, we were having a great time. And I was giggling like a fool. And she told me I was the most fun interview in years, and we got to talking about Arizona, and Arizona ingredients. It was Hatch chile season, and I was crazy for them, and asked her if she’d ever tried them. She hadn’t, so I said I’d send some.

She said she’d cook with them — put them in cornbread, maybe — and a fantasy took hold. I thought of an exclusive Ina chile recipe for the Republic. Imagine — what a coup! I thought of Hatch chiles in her next cookbook. And I thought of myself,  in her Hamptons kitchen, helping her make green chile soup. Fantasies aside, sending Ina Arizona ingredients to try would make for an excellent newspaper story.

And here’s how it all went down: it took me f-o-r-e-v-e-r to find mild chiles for Ina. When I finally did find them, it took me forever to figure out how to send them. I wrapped them in burlap and black and white striped ribbon. I bought ice packs. I sent two dozen tortillas from Verde to go with.

And by the time they got there, she was on book tour, on the Today show, filming her Food Network series, and there wasn’t enough time for my grand plan. Or cornbread. Or even a taste.

But she did send me this: 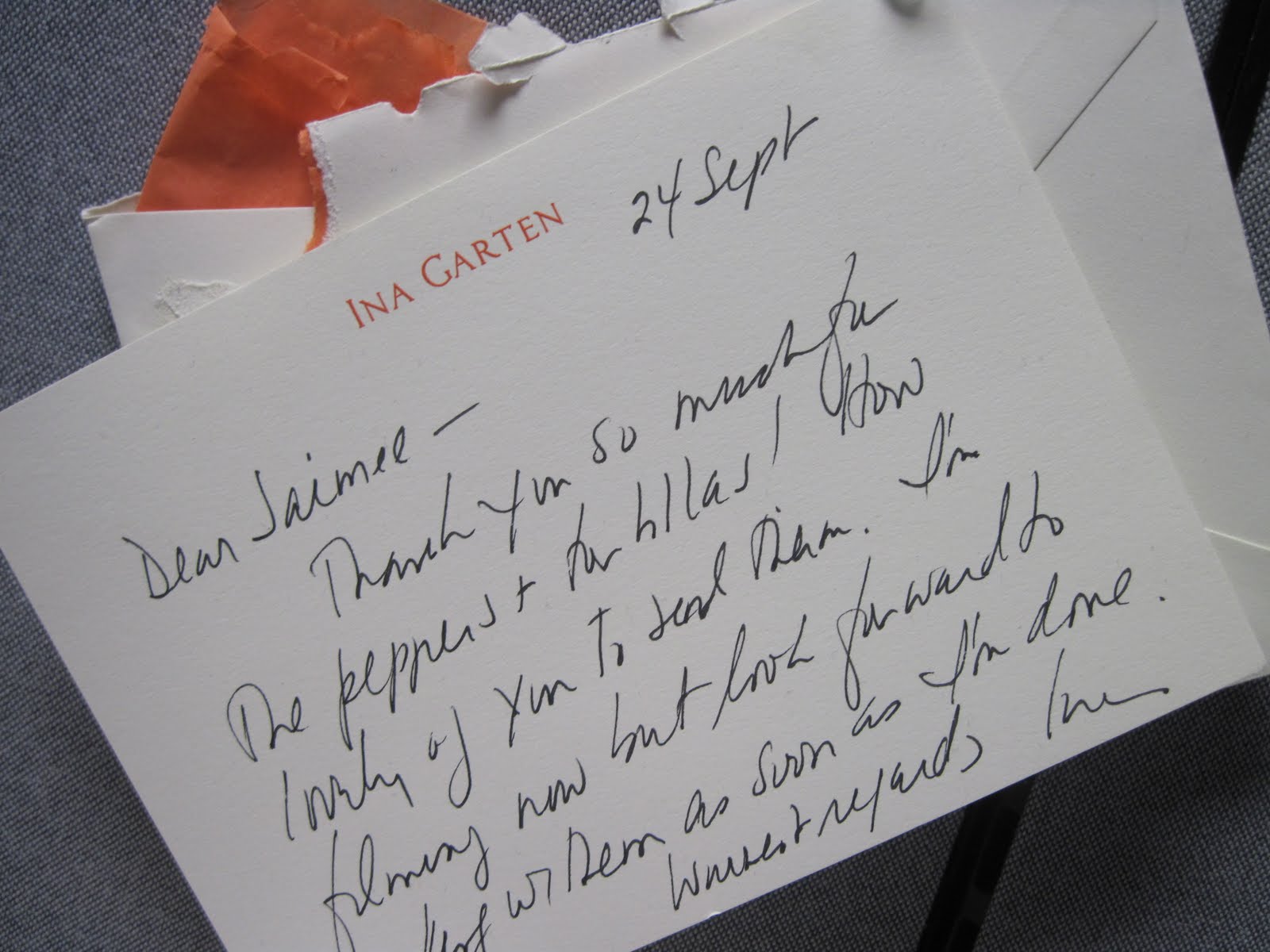 I had to act cool in the newsroom when I saw that Hamptons address in my mailbox, when I tore open the envelope and saw the elegant paper and orange lining. I had to act, you know, like an unbiased reporter.

It was really hard.

(If you want to meet her at Sur la Table in Scottsdale tomorrow, details here.)