Do you know what it means to miss New Orleans? I do. That city captured my heart in an hour, had me adopting a Southern accent, eating beignets and jambalaya, dreaming on balconies, winking at strangers, dancing in oh-so-many streets. It is a magic place, piled with so much joy that only New Orleans could recover from so much sad. And it is, oh, it is.

You MUST go to Mardi Gras. I will never, ever miss it again. It’s the most fun I’ve ever had – a piece of America that feels like someplace else entirely, a fairy tale where Louis Armstrong is singing in Neverland, and all the naughty characters of Pinocchio’s Carnival have come out to Cinderella’s Ball. (Which, by the way, is BYOB.) I LOVED it. A glitter-covered thanks to Jimmy and Cindy for sharing their love for this city with me. 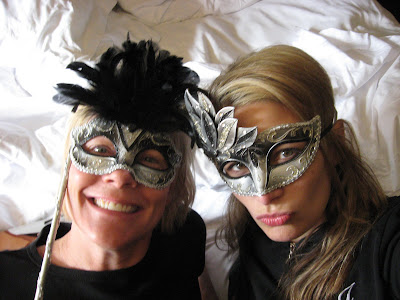 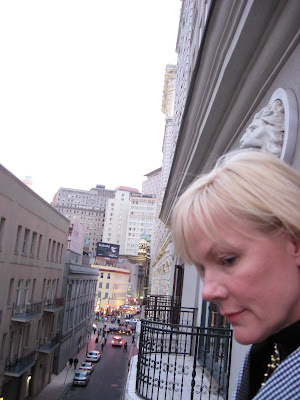 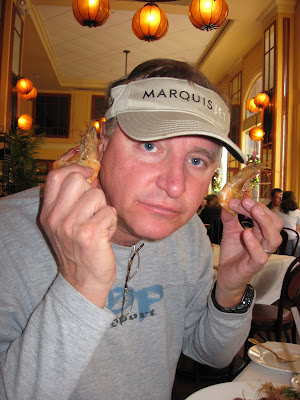 We stayed at the Ritz, ate crawfish and oysters like mad, danced until two-four-six a.m., went to a ball, caught beads in parades, saw things that you’d NEVER see in Vegas, walked by the river, had the best gumbo on earth, and drank enough champagne to reinvigorate at least one New Orleans neighborhood. 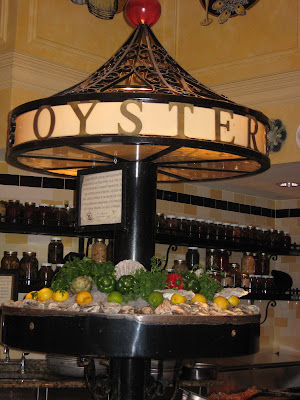 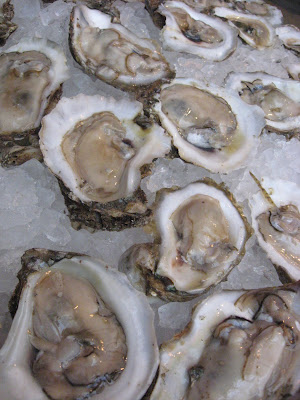 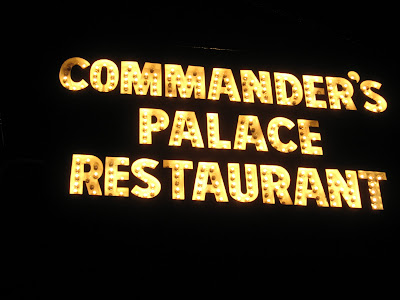 Then, a taxi dropped us off here: 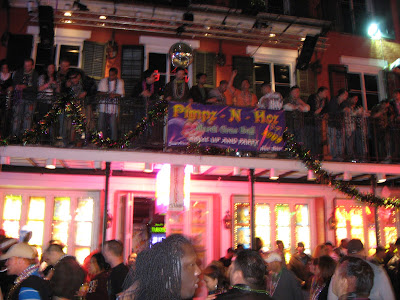 (That’s Bourbon Street, and wow.) Walking back to the hotel, the streets looked like this: 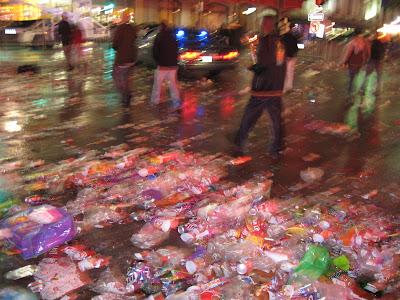 In the morning, I went for a walk in the French Quarter. I stopped here: 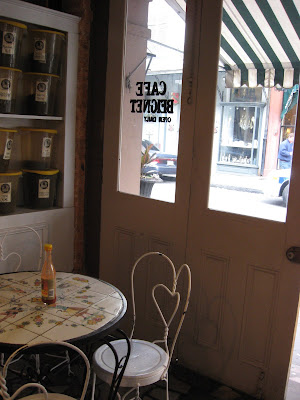 And ate one of these: 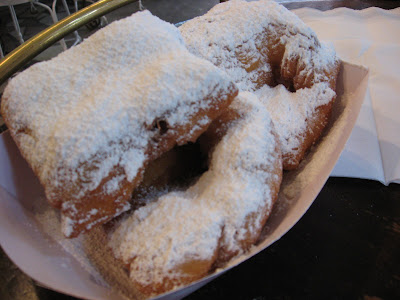 (That’s a beignet, if you’re wondering.)

I had such pretty buildings to keep me company. 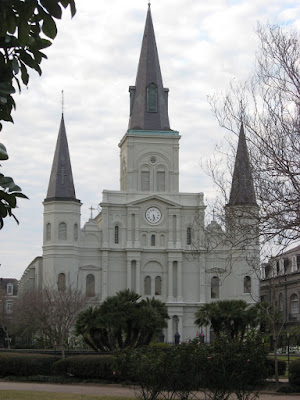 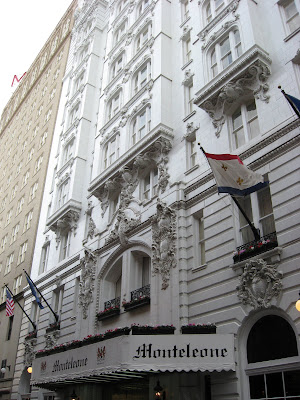 I looked in so many luscious store windows on Royal Street. I’d defect to New Orleans just for these signs: 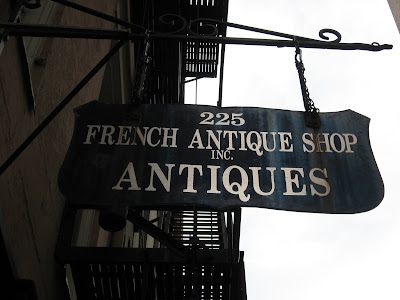 And then it was time for the parades. Our boys got all dressed up and went to join the Krewe of Bacchus on this: Puddinn’ and I were left to the care of a New Orleans Police sargeant, a friend of my hosts’, who took us around in his car, fed us jambalaya and King Cake, caught me strands of pearl beads, and showed us the town. Those police know how to party. These fine folks taught me how to make a whip out of Mardi Gras beads: 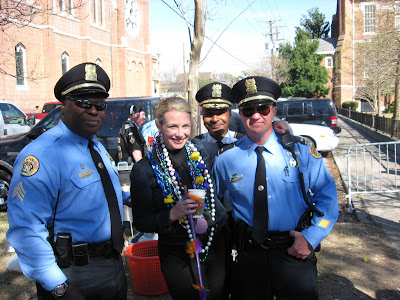 A fireman’s famous jambalaya. Two hours later, this was all gone: 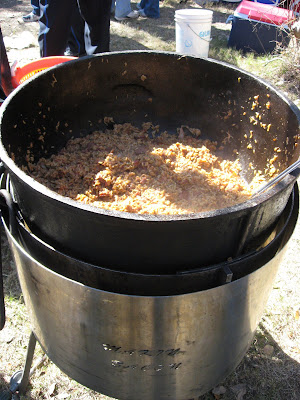 At the Zulu parade — I want a headdress that looks just like this: 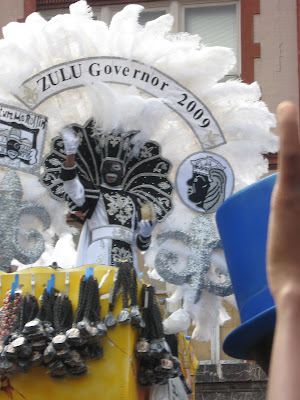 We went back to the hotel with loads of new jewelry: 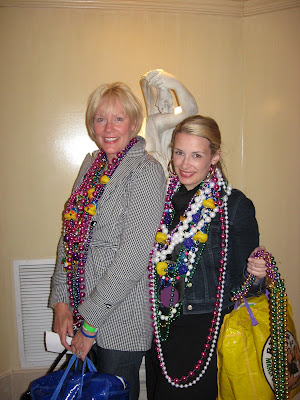 And got all dressed up for the ball: 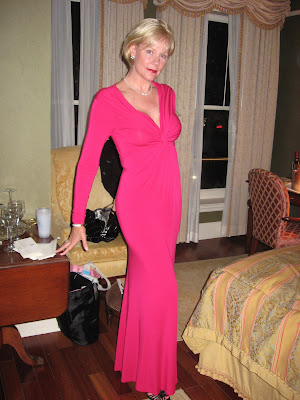 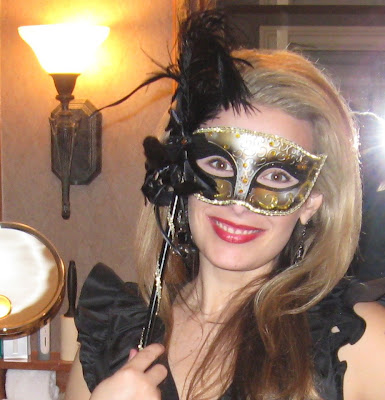 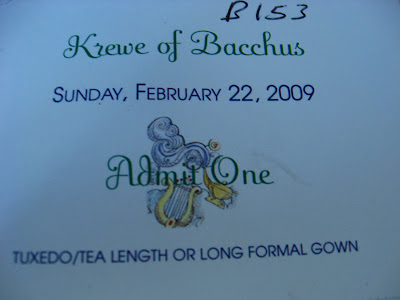 Fancy, fancy, and BYOB. (Why I love the South: Imagine a horde of Southern Belles, walking to the convention center in crinolines and evening gowns, toting ice chests and plastic bags filled with wine.)

I saw belles dressed up in gowns like this: 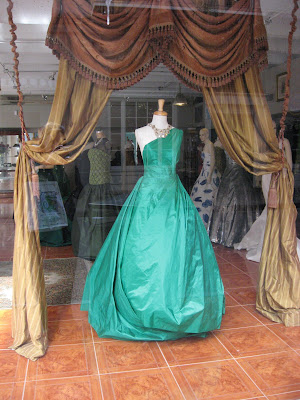 And also in getups like this, which is just a teeny hint about the things in New Orleans that I saw, and cannot show you. Get there as fast as you can. 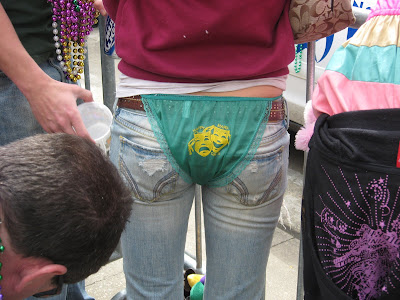