“New York has existed for me simultaneously as a map to be learned and a place to aspire to — a city of things and a city of signs, the place I actually am and the place I would like to be even when I am here.” — Adam Gopnik, in Through the Children’s Gate: A Home in New York When I am in New York, which I was for the past few days, I like to be standing on a streetcorner in the 7 p.m. bustle, when the city is dark and loud, and your hands are cold and someone is always pushing you while you wait to cross the street, and you look the other way to check the traffic and see something like this: Just the Chrysler Building, peeking between the skyscrapers, towering over Grand Central Station, punctuating everything I believe about the transcendent experience of discovering New York. When you’re in New York, it’s important to look up. I was walking out of Eataly, eating an amaretti cookie and thinking about pasta, and there was the Empire State, pointing my eye toward a blue October sky. I was walking on the Upper West Side, pretending to be Nora Ephron, and found a building as beautiful as I’ve ever seen. And you can live there. Really. It’s apartments. 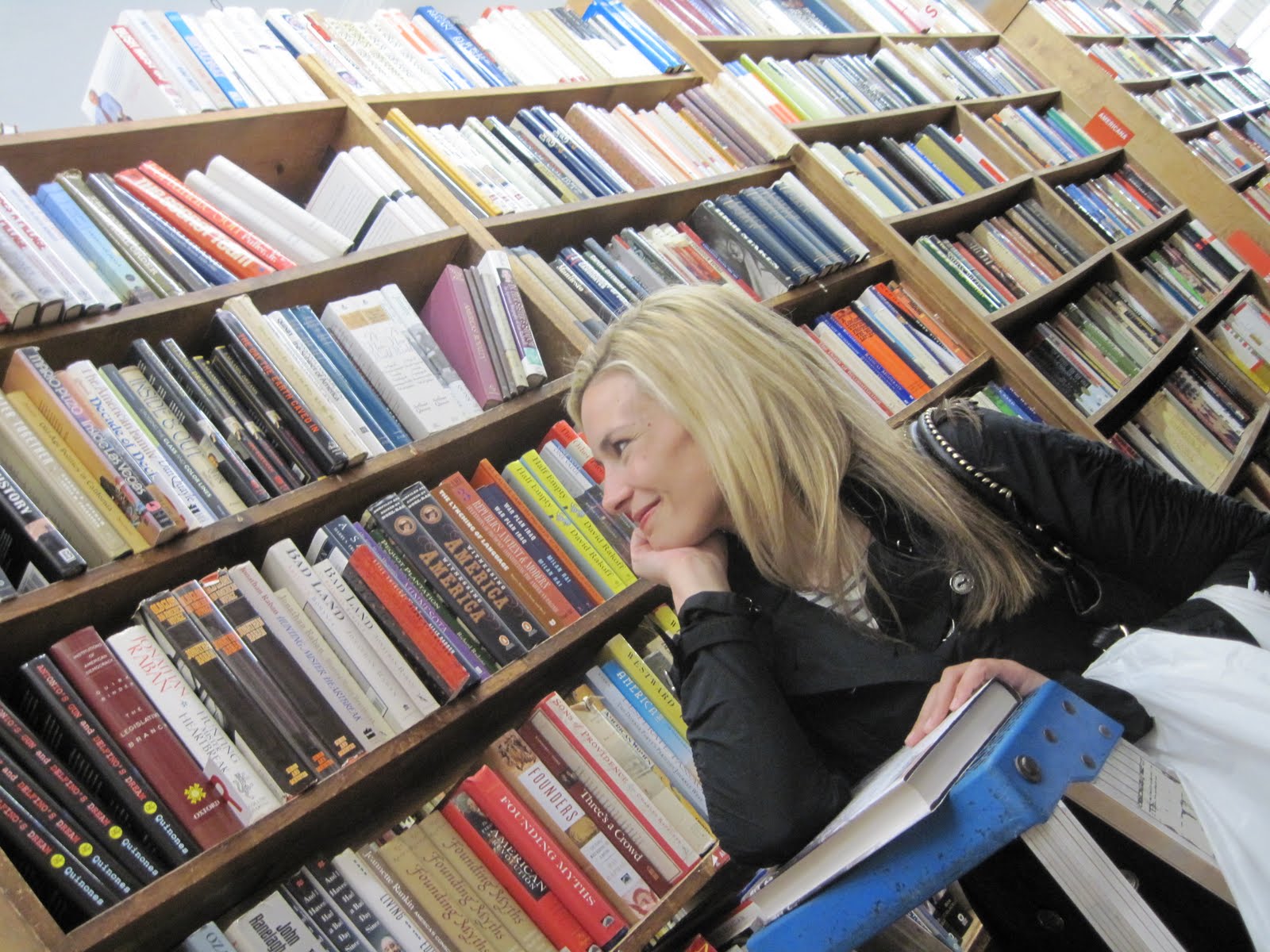 I climbed up  a ladder at The Strand bookstore, where the shelves go up two stories and you have to hie to the skies,  Audrey Hepburn style, to reach for your words. Photo courtesy Marni. 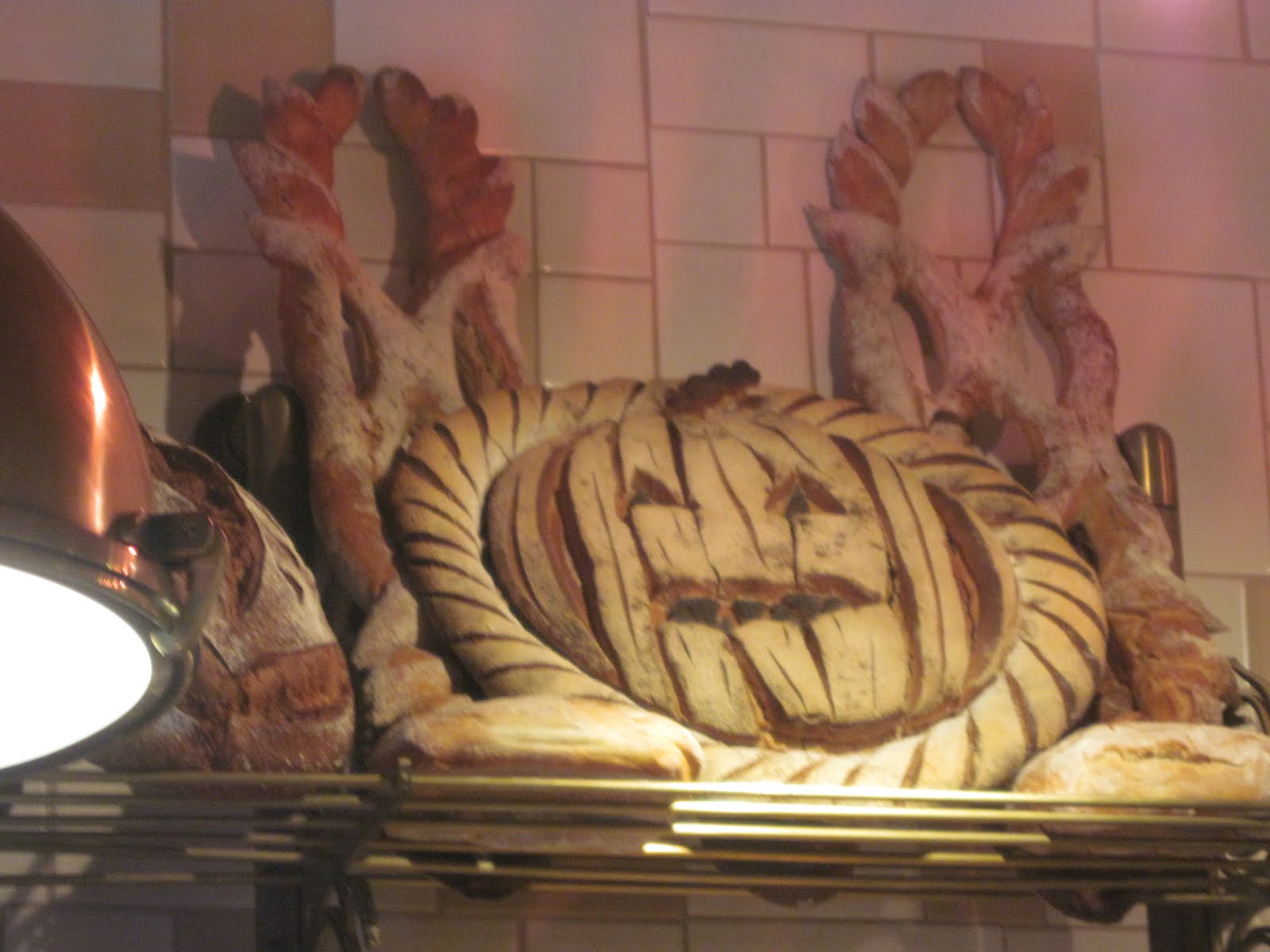 On the top shelf at Payard, there was bread carved to look like a jack-o-lantern. In a store window, below, England and taxidermy and plaid turned wild and wonderful. I spent an afternoon walking across the Brooklyn Bridge with Marni, Michael and Shanna —  looking up, and back, and down —  and trying to recite Walt Whitman’s Song of Myself: “Have you reckon’d the earth much?” (I wish I’d remembered that part.) (Above: Michael and Shanna. Below: the bridge underfoot. I loved thinking about footsteps and history and DNA.) I walked up Fifth Avenue along the park to the Guggenheim, my mind wandering around Frank Lloyd Wright, who designed it, and Arizona, where he lived, and his family, who I interviewed, and the small in the large. (Inside the Guggenheim, looking up.)

On this day, and on this sidewalk, there were two paths: a leaf-free zone and another walkway where all the leaves had ended up. I walked there, listening to the rustle and crunch of autumn. In New York, it’s also important to look down. You can see history there. (Brooklyn, your cobblestones are showing.) 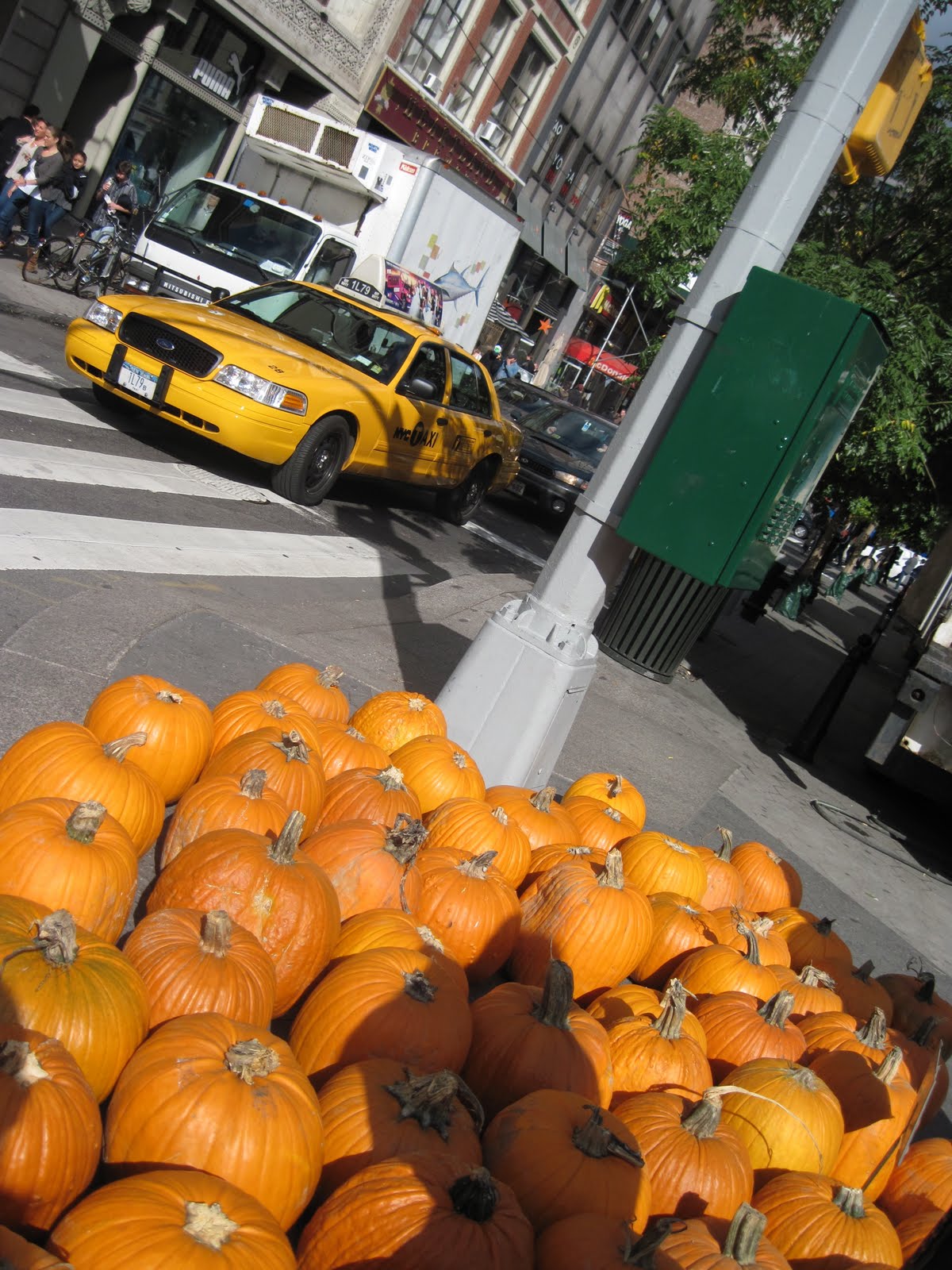 Looking up at Chelsea Market, I saw the most beautiful clock: Beneath it, there were more pumpkins. They were everywhere. I was in heaven. There’s the whole world — the melting pot that is this city — on the bottom shelf of a bodega newsstand. 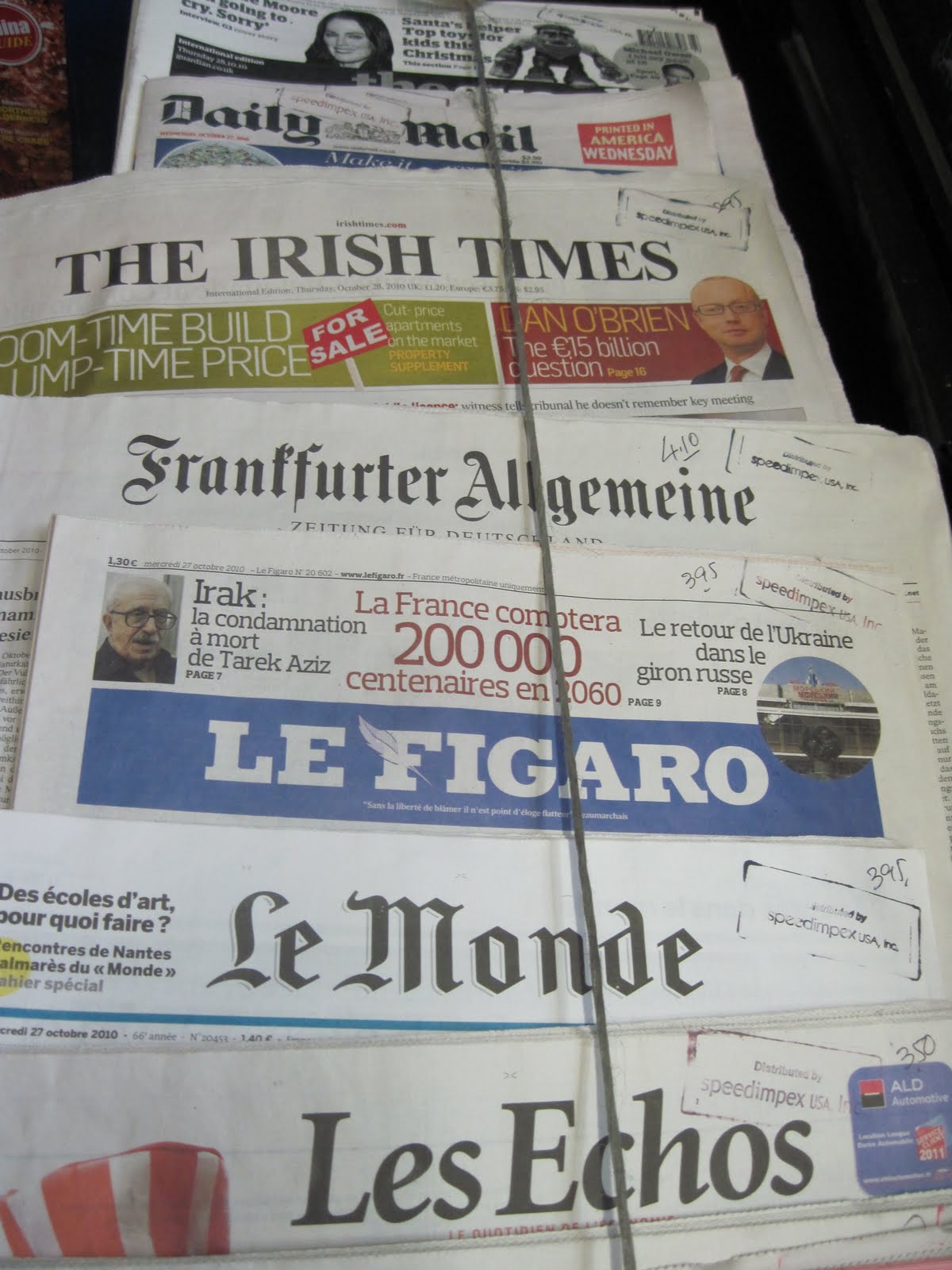 At Mood Fabrics (of Project Runway fame), there was a glorious pintucked dress. And it’s important to look closer, because those pintucks and pleats and gathers were made entirely with pins. 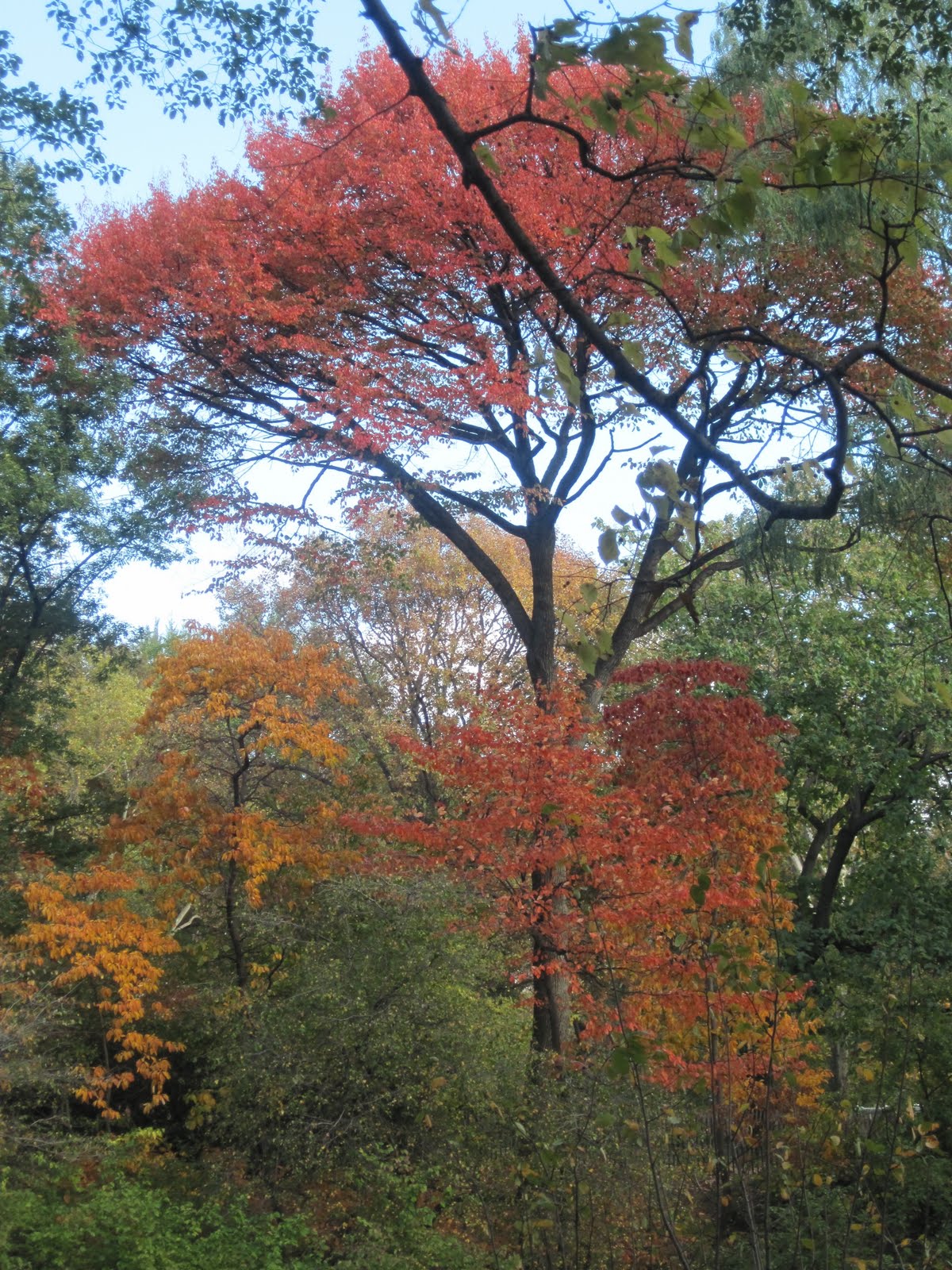 And mostly, in New York, I just looked happy. 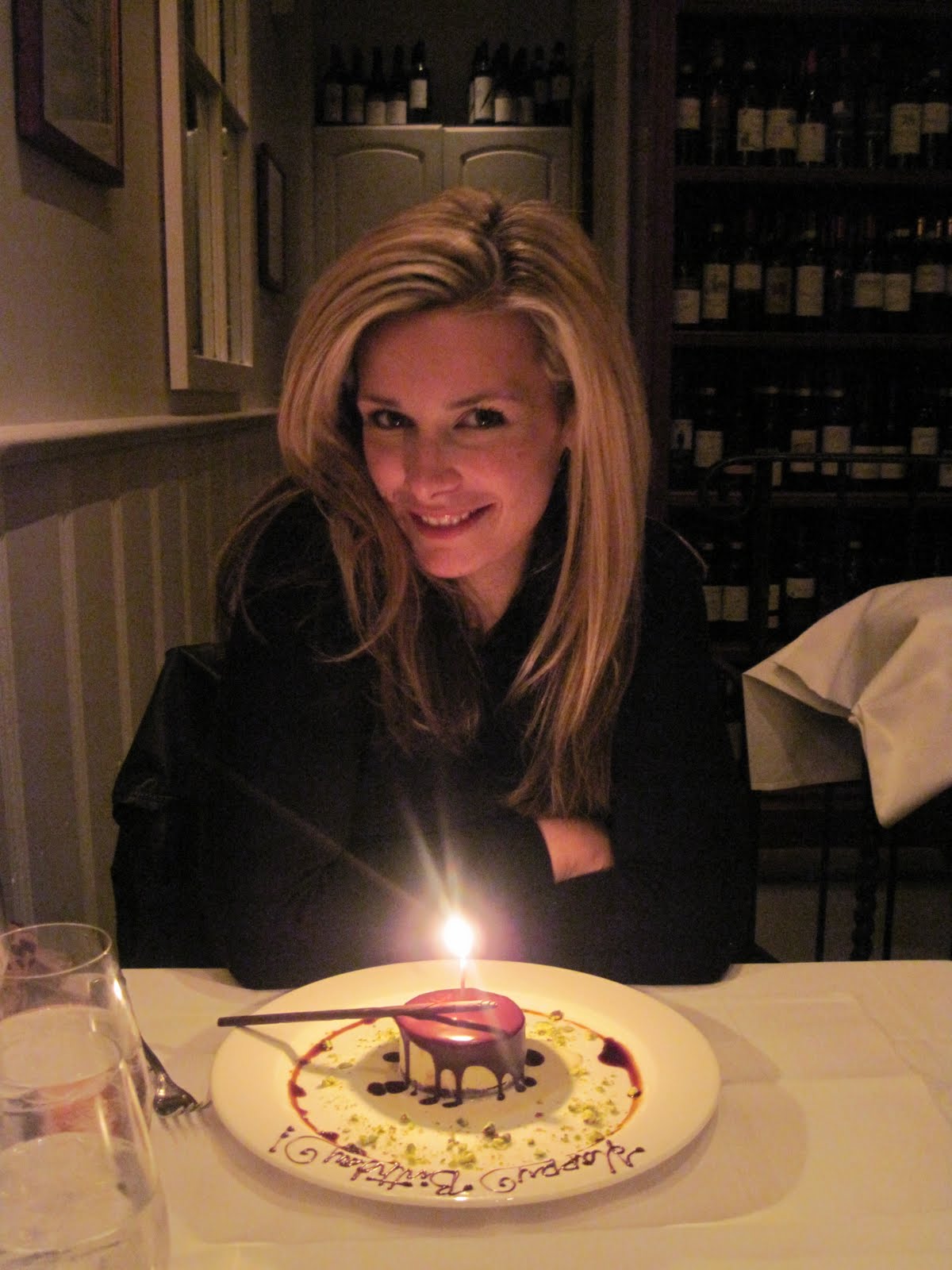 “Do New York!” Henry James wrote to Edith Wharton (another glorious tidbit from Gopnik’s NYC tome.) And I did, or I tried, and I came home feeling like all the lights in the city were still sparkling in my mind. But New York is a transient place, and even when you’re right in the middle of it, it tortures you. I wanted to make it mine, to capture it somehow, with a camera, in a sentence, in a window on Fifth Avenue, in a shopping bag, on a plate at Babbo, in a frame at the museum, or find it distilled on a doorstep on 61st Street where there were pumpkins mixing with leaves.

And I couldn’t quite get it all — which is what I think I love about New York. It’s there, waiting, with more.

(And this week, I’ll show you the rest of my discoveries.)