One of my writer friends likes to call me and tell me about fancy dinners he’s having with fancy literary people. I am always jealous for two reasons: the names I know make my head spin, and the fact that there are names I don’t know means that he knows more than me.  Here’s to catching up with him and long fall evenings under blankets with hot cocoa:

1. Many of the literary folk in my small orbit are speaking in sonnets about Louise Erdrich’s The Round House, a National Book Award finalist about growing up on the North Dakota Ojibwe reservation. I’m really looking forward to this. 2. I love Sam Sifton so much that if he wrote a book about camping, I might buy it, just for his description of a s’more. But Sam Sifton on Thanksgiving? Pass the pumpkin pie. Sifton was the New York Times food critic, and is now the national editor, and offers gorgeous sentences even on Twitter. His small, smart book tells the best way to make and serve and enjoy the November American feast. (And is a brilliant hostess gift, if you need one.) 3. Michael Cunningham and Julia Glass and the  Empire State Building appear on the cover of These Things Happen, which I bought on a day when big things were happening for me in New York. I love everything about it and I haven’t opened it yet. Richard Kramer wrote for “thirtysomething” and “My So-Called Life,” and to me, little else matters. I’m all in.

4. The Heart Broke In is also worthy of devotion — a compelling, can’t-put-it-down read, I’m told. Those are the best kind. 6. Lastly, and quite possibly my favorite, just for the first line from the book description:

“A woman embarks on a dazzling new phase in her life after inheriting a sprawling mansion and its vast collection of taxidermy.”

Lydia Millet’s highly praised Magnificence is going to be the book I wish I’d written, I can tell. I grew up in a house filled with taxidermy. My father has a state record, and has placed in the top three in the world for shooting an elk with a bow. Once, when writing a story about taxidermy, I came upon my dad’s famous elk (head) in a source’s garage. That was a really weird day.

Millet is a Pulitzer finalist and a new Guggenheim fellow. I bet she hates all those paper antlers for sale in the mall. P.S. Friday is a retail extravaganza in Phoenix/Scottsdale: Union opens at The Biltmore, Restoration Hardware opens its new concept at the Scottsdale Quarter, and The French Bee moves to 32nd St. and Camelback near Molina. Tonight I’m hitting the opening soirees for all three — tune in later for my after-hours report.

If you go to Restoration Hardware for the 9 a.m. Friday ribbon cutting — and you’re all invited — chairman Gary Friedman will be there. Yes, the man from the catalogs. Who is as nice-looking as the furniture in the catalog. You could see if he’d tell you where he got that leather jacket.

I was so happy about the rain this morning that I came downstairs, opened the patio doors for the first time in seven horrible desert months, and sat close by to listen to the drops.

Then T came downstairs and shut the doors and gave me a stern lecture about the cost of air conditioning – a lecture that continued far longer than it should have.

Don’t you dislike those women on the internet who pretend their husbands/boyfriends are always romantic, kind, flower-bearing, date-planning souls?

Besides driving to work with the car windows down, here’s my weekend plan:

I like it when people tell me I have to have something — just the idea of buying a “must-have” burgundy lipstick for fall makes it seem like the weather will change soon, and my closet will fill with  magical leather-trimmed leggings, that also make me look very thin. I have hopes for Nars’ Scarlet Empress, $24 at Neiman Marcus. I plan to try many shades until I find The One. How to pretend I live in France: see the two Francophile movies out this weekend. Little White Lies is an indy film starring Marion Cotillard, with English subtitles, that is billed as “The French Big Chill” and winning rhapsodic reviews. It’s playing at Camelview, for my fellow Phoenicians. (Have dinner before at Vincent’s Bistro to properly set the mood.) 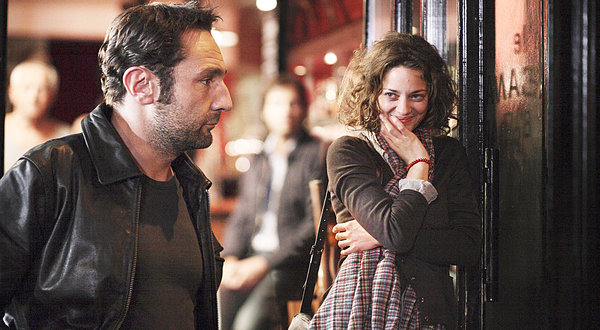 #2: The Words, a Bradley Cooper-written film set in 1940s Paris that is getting mixed reviews. I already know I’ll love it. I could watch a silent film of Bradley Cooper walking around 1940s Paris with absolutely no plot and be quite pleased. Read my friend Barbara VanDenburgh’s review here. Barbara may be the smartest person in my office. She’s 30. And if I’m buying carved-up books, the writer in me insists on procuring a book I can actually read. I loved Jonathan Tropper’s last book, This is Where I Leave You. I’m going to drive (with the windows down) to my nearest bookstore, which is 30 minutes away (the world is ending), and bring home this: 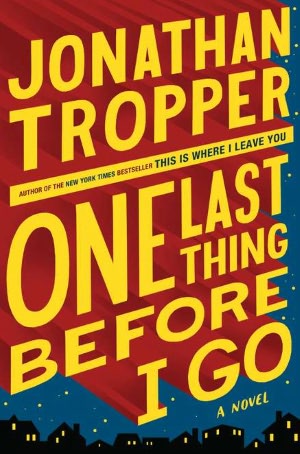 Also: my home decorating projects will continue. On Monday, I’ll show you the wall in my living room that I painted black. And soon, in my laundry room, instead of polka-dots, there will be stripes. Happy rainy weekend. See you Monday.

P.S. Can someone please label these earrings a “must-have”? I need an excuse to push “buy.” $212 at ShopBop. A book to love

The first sentence of a newspaper story is called the lead. Journalists have been known to obsess about crafting a clever offering until they drown in a pot of coffee or Diet Coke, depending.

In books, I use the first sentence as a gauge. If it’s good enough, I’m all in.

JR sent me William Boyd’s “The New Confessions” to read, with his highest praise.

“My first act on entering this world was to kill my mother.”

So there you go.