This craft project began as lacy pumpkins and ended as racy pumpkins. I feel kind of bad for the pumpkins. But I didn’t mean any harm.

But this is still fishnet stockings on squash,  and there’s nothing I can do to change that. 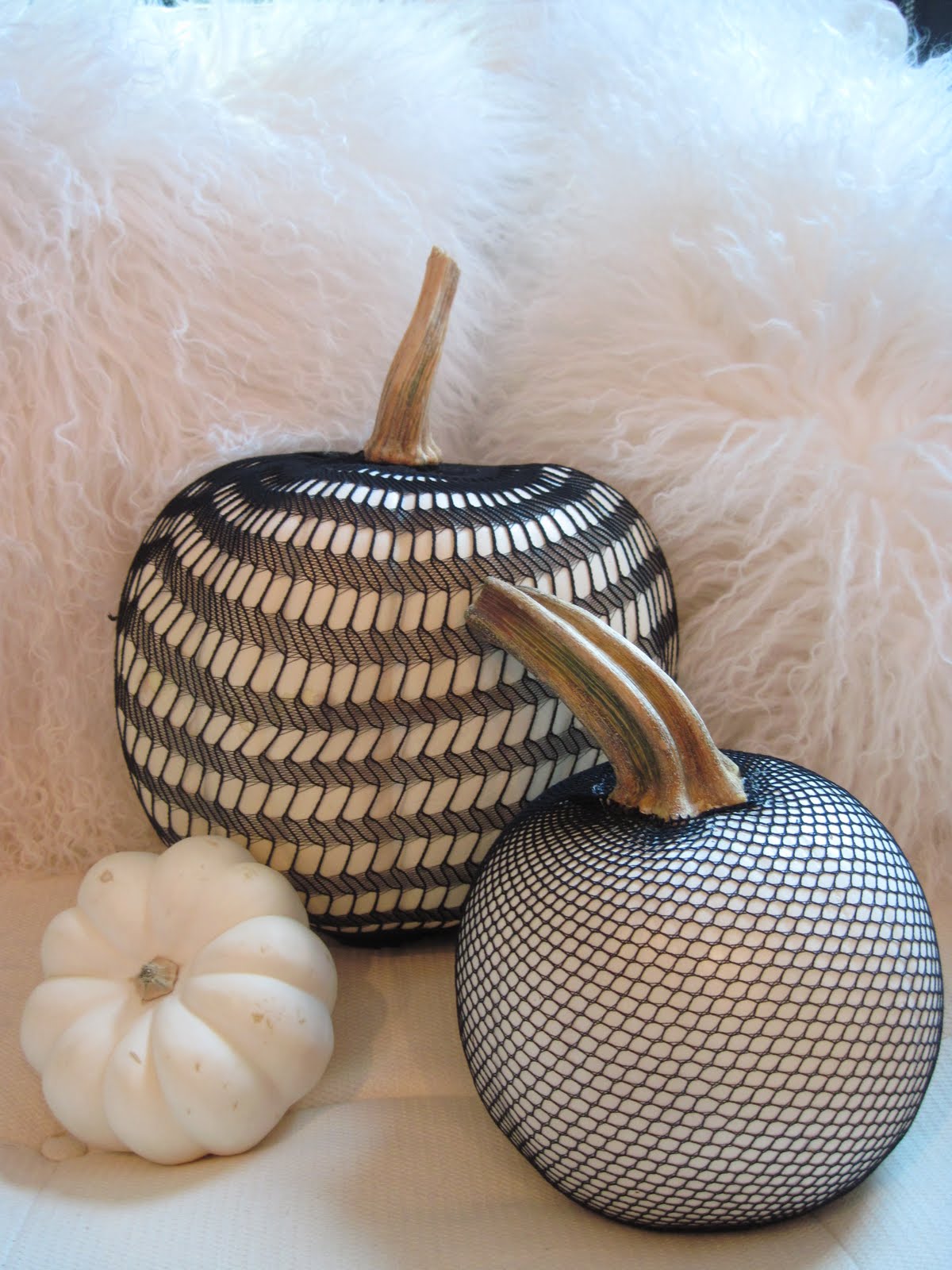 And maybe I got into some feathers, too. 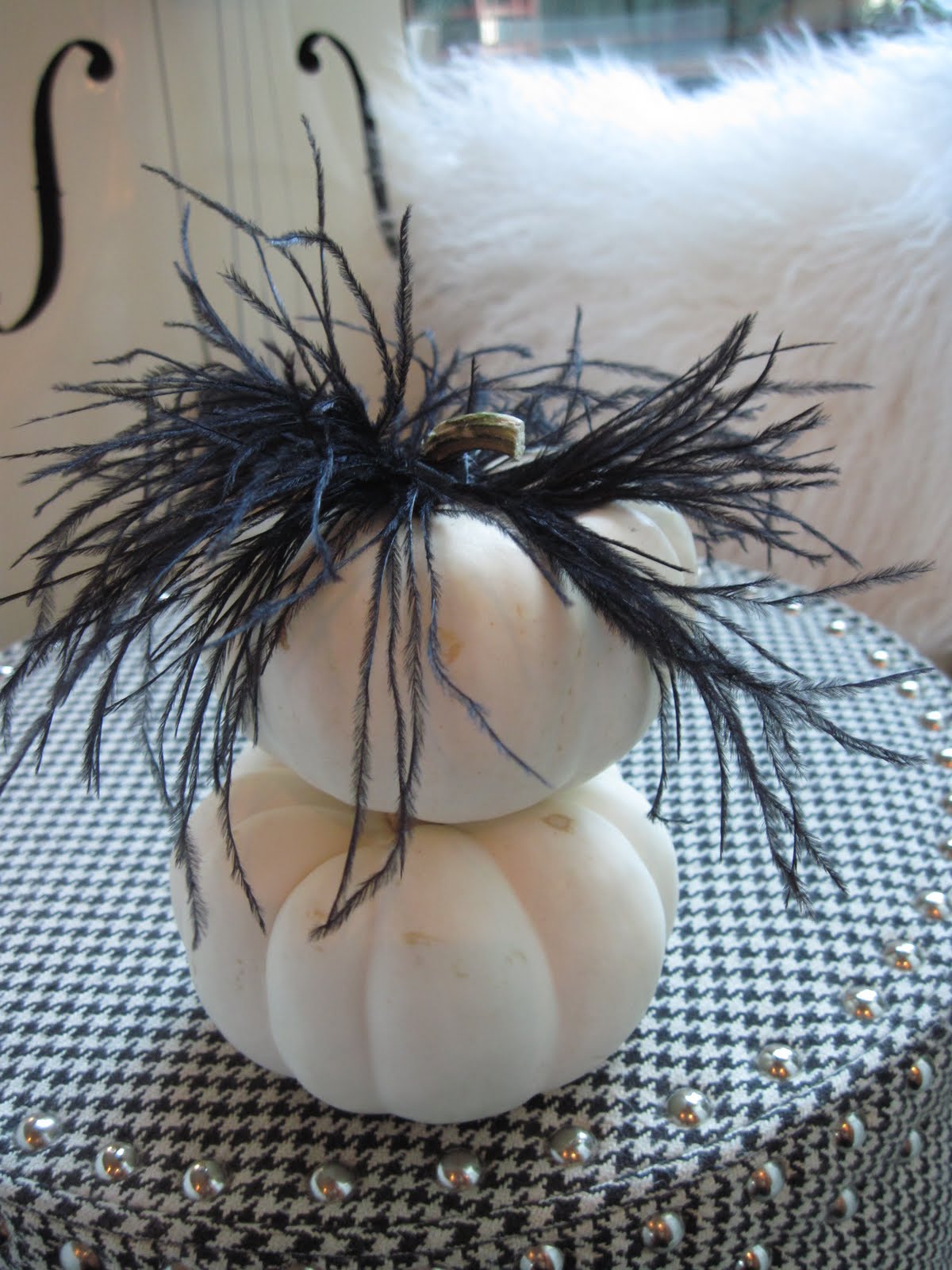 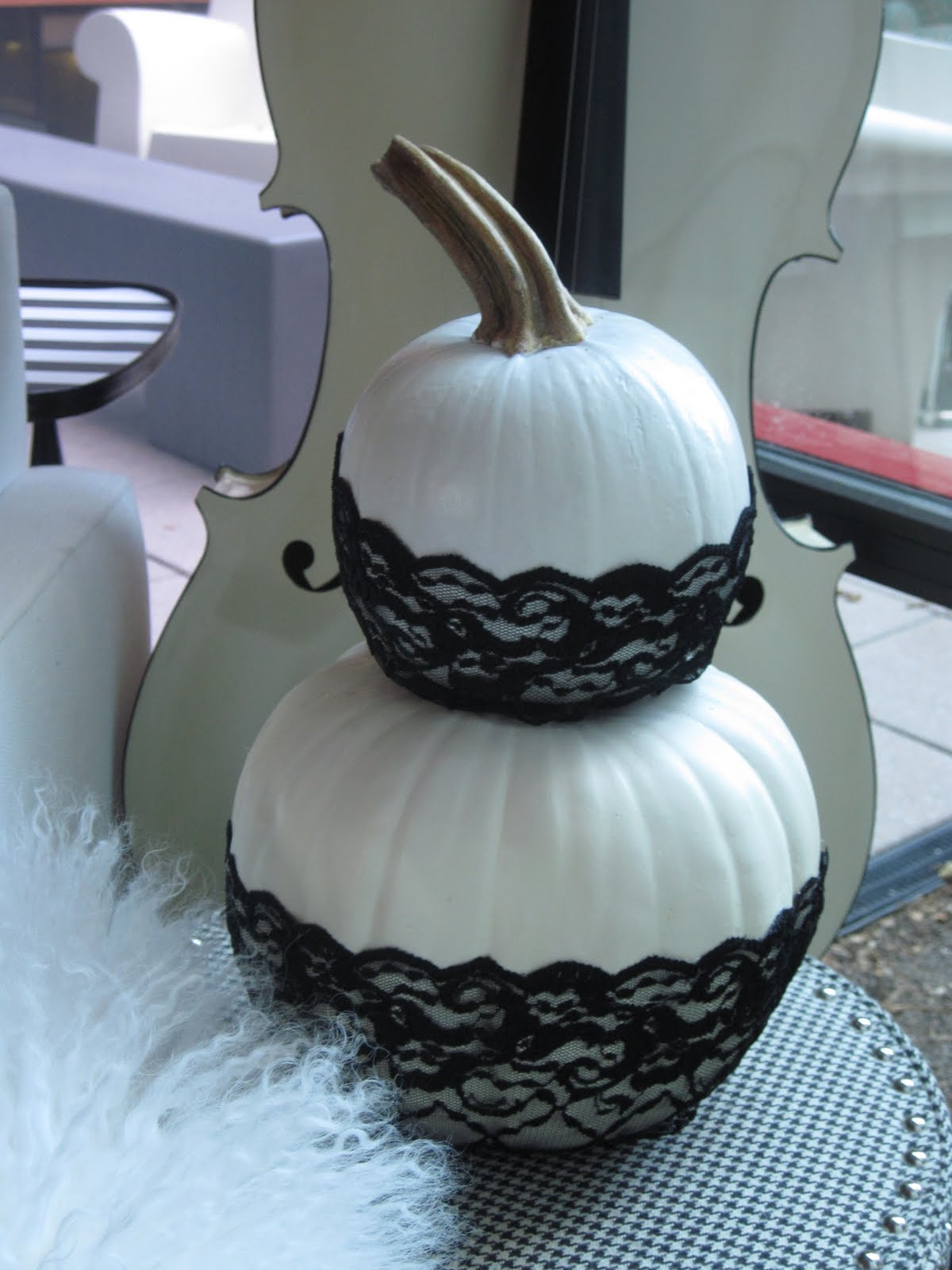 In my defense, I got the idea from the wholesome wonder that is Better Homes & Gardens, so it can’t be ALL bad. We are getting to the place in Fall Craft Week where someone needs to come over and take my hotglue gun away. I’m too excited, too ambitious, and I already have too many pumpkins.

And yet, I am plotting a Saturday spent creating this pumpkin by Sweet Paul, who I believe to be the most inspiring person to grace the planet since Martha Stewart.

My mom and I want to try Country Living’s decoupage pumpkin crafted from Pictorial Webster’s — a book that has been high up on my wish list since I saw it in San Francisco. Photocopy the pages, tear out a few pictures, get out your modge podge. (I’d add a real stem.)

Also from the latest Country Living, this quilt-inspired pumpkin, which is decoupaged as well. I considered it, until I realized that every. single. tiny. piece. of that quilt was separate and had to be cut out, lined up, etc. Ugh. Download the pattern and find instructions here.

I sent this email to my friend Ricki early this morning: PRETTY PLEASE can I come over so we can make these? Ricki has a Silhouette craft machine, which makes these pillows as easy as ironing the letters on to IKEA cases. Fantastic. From Tater Tots and Jello. I love this mantle in my preferred Halloween hues: black and white. (Maybe I bought an orange pumpkin, and maybe it annoyed me so much that I put it outside.) The chains are the best part. Created by Kate at Centsational Girl. 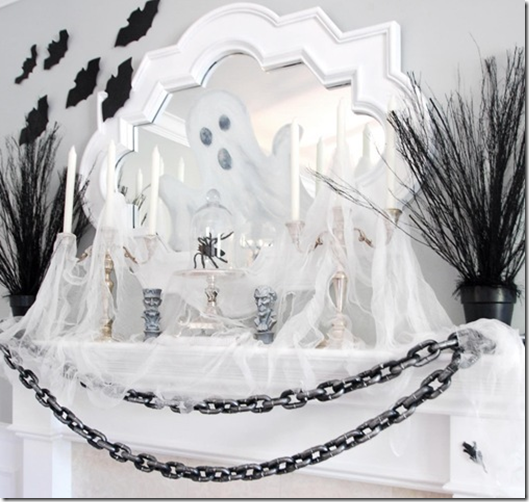 Did you see this Pac-Man Halloween garland? I’m hearing Pac-Man is suddenly hip. Kate of Mini-Eco tells you how to make it here. (Spotted on Popptytalk.) 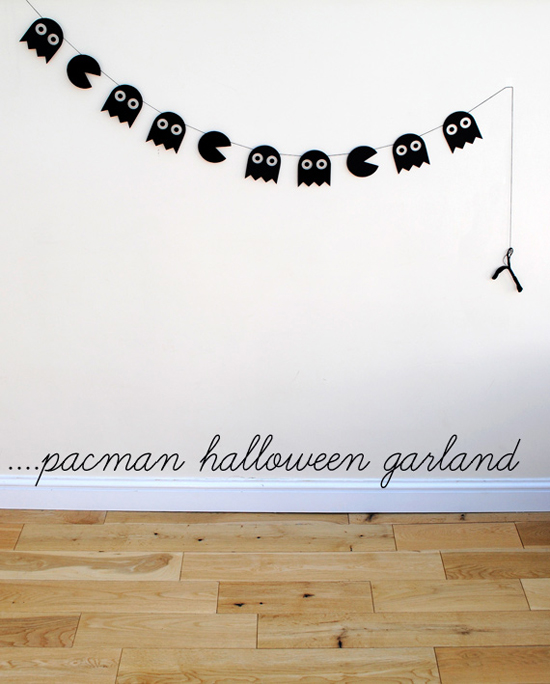 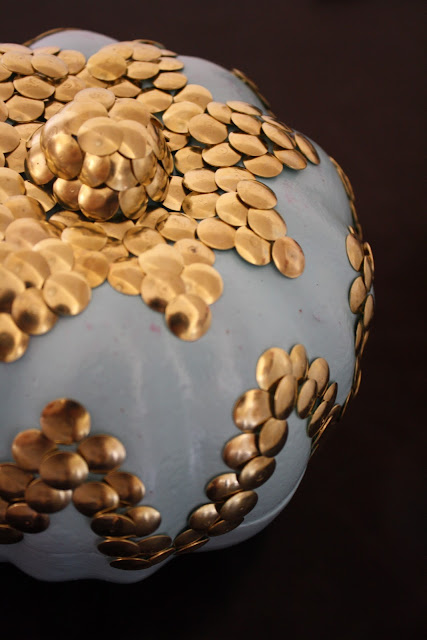 I’ll have a few more crafts coming next week . . . because can you believe it? I STILL HAVE MORE.

Which of this week’s spoils are you most excited to try? (Pretty please leave me a comment. I know it’s a little fussy, since azcentral requires its own login, but I miss hearing from you all! Part of the fun of this blog is hearing about what you’re doing with all that we discuss. Email me if that’s easier: jaimee.rose@arizonarepublic.com)

Fall Craft Week: Your Creations, all made in Arizona

Look at all this cool stuff you made.

Kim at TomKat Studio put together the cutest cupcake decorating party, complete with downloads like cupcake toppers and spooky buffet labels. (Kim, where did you get those place mats?)

Susan Crabtree imagined glittered coffin party invitations, and who could miss a party that begins with this? Instructions on her blog, Poca Cosa.

Susan, what is that bone paper? I need that, too.

These pillows were made from repurposed men’s suits by Bev Burch, who owns the Willows in Phoenix. These are for sale in her shop, but they’d befun to try at home, too, after a spin through a thrift store.

PinkSlipStyle‘s Ginger Murphy made thils killer spooky tree, which even has candles you can light. Find it at The Willows.

Cindy Lewton set the tab;es for a Ryan House fundraiser with style: a Mad-Hatter-in Autumn theme. She MADE that doll, people.

Alice in Wonderland meets pumpkins. That sounds like a good theme to me.

Kelly Ettenborough — who was my editor here once upon a time — crafted a chalkboard canvas with her tween-aged daughter, Ivy.

Kelly: “The front and all the edges were painted. (The glare on the photo looks like it isn’t.) Then, since we recently had seen The Help, this is what Ivy wanted to write on it with blue chalk. We also have a three-foot by three-foot canvas hanging in the hallway. It’s like a rotating art exhibit. Guests write messages and draw pictures.

By wiping away the chalk with a damp washcloth, you can change it to anything you want.

We hung Ivy’s “chalkboard” by her mirror in her room as she spends a lot of time there these days fixing her hair. A lot of time.”

And Shauna at JAM made glittered pumpkins, which are still one of my very favorite things to do in fall.

What, you thought we were going to get through this week without a calorie fix? Sacrilege. Sugar is my favorite medium.

How about a Candy Corn Milkshake, as imagined by local Susan Crabtree? (Mini versions would be perfect for my mom’s Halloween bash.) 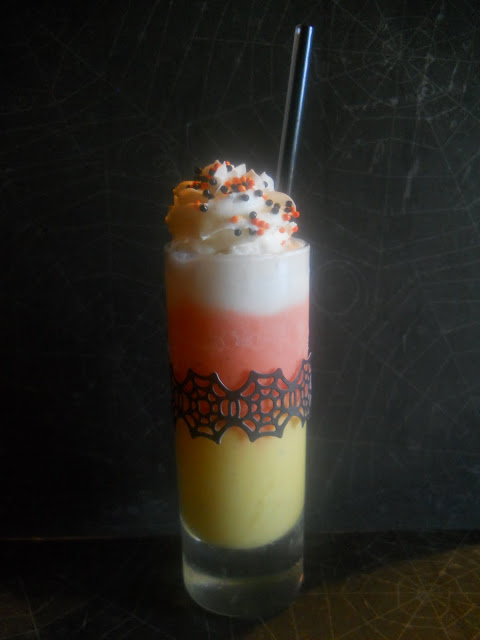 Candy Corn Cheesecake Mousse from Glorious Treats, which gloriously does not taste like candy corn at all. (Hey, I love it, but only in its original form.)

Brain cupcakes from Martha, of course. In my family, we believe in gross-out food.

Ghost cupcakes, draped in rolled fondant — genius, because you can buy it at Michaels.

Cupcake liners turned into witch hats from Half Baked: Licorice trees with a candy corn fence, from Parents Magazine: Are you ready to get your treat on? Assemble your sprinkles and get decorating. AZCentral’s first annual cupcake decorating contest is officially ON, and the deadline is Monday, Oct. 10. GET THIS: There’s no taste test. This contest is about looks alone. (I think this means you can go buy a box of muffins and have at it.) Email photos of your frosting achievements to kylie.gad@arizonarepublic.com.  Details here.