A Party at Prada, and three weekend ideas (free cake!)

Prada Scottsdale hosted a chic soiree last night to celebrate its opening and the return of the Valley’s shopping weather. The invitations were gold-rimmed, the waiters were all male models, and even Larry Fitzgerald turned up. I went full-scale-delusional-autumnal-outfit: tights, boots, a dress, and a silk blouse. That’s hot, my friends, in the least lovely way possible. Also: I’m so sorry I didn’t take a photo of the waiters. (Yum, with apologies to my fiance.) Here’s a peek inside the very pretty-peopled party,  and keep reading for a new restaurant and book to try — plus free Tammie Coe cake today: I had big eyes for the Prada jewelry collection. And the furs. I’ve been stalking these sunglasses for months. They make me feel like Audrey Hepburn standing on Fifth Avenue with coffee and a croissant. Ah, the stories we let the movies tell us about ourselves. My friend Britony, in the best necklace of the night. Above: great shoe-watching. Below: the stylish girls of The Agency AZ — Margaret Merritt, right, Ginger Murphy, at left, and local Kelly Mittendorf, the worldwide face of Prada, in the center. Kelly just flew back from London fashion week. Ahem.

Ginger has a fantastic fashion blog and is a dear friend. It was her idea to take the above photos of shoes – thanks, pony! I love this studded, beaded collar SO much. Prada’s new boxes are baby pink and gold.  I want enough to fill my entire closet. Sales from the evening benefitted Phoenix Children’s Hospital. Puddinn’ took the opportunity to see about a new handbag and some smoking slippers that I am going to steal from her closet in the night. The store is now open in Scottsdale Fashion Square. Go and say hello – but do not take the last pair of my sunglasses, OK? And now to the weekend …

Local birthday cake goddess Tammie Coe is having her own birthday on Tuesday. To celebrate, she’s giving out free birthday cake to everyone else today — and this isn’t just any other cake, my friends. It’s Tammie’s crack cake, which she says is her “most favorite dessert of all time . . . It is a flourless chocolate cake with a chocolate custard that tastes like ice cream.” The first time I tried it, my eyes rolled back in my head and I said naughty words. Get your free cake today at both Tammie Coe locations: the studio on 40th Street and Campbell in Arcadia and the cafe on 7th Avenue and Roosevelt downtown.

I’m a chef stalker, and Matt Carter is one of my most beloved targets. He’s the man behind The Mission and Zinc Bistro. His latest just opened this week: The House, a brasserie in Old Town Scottsdale with Mediterranean overtones that is just so pretty. I’m excited to try roasted Jidori chicken, wood grilled crab legs, butterscotch pudding (yessss) and caramel apple upside down cake. Sit outside – because tomorrow is the FIRST DAY OF FALL!

I’m an Ian McEwan fan, and his new novel Sweet Tooth is reputed to be among his best. It’s also about readers, and words, and I’m besotted already because I stumbled onto this quote from the book in a review:

The book follows the story of Serena, a student at Cambridge in the ’70s who joins a spy operation and falls in love with a writer, seduced by his words.

I’ll be spending Sunday in virtual London, in love. The best sheets ever and other bargain finds

I have a sheet fetish shared by four of my best girlfriends, and our combined obsessive-compulsive behavior (and significant financial investment) brings you this news today:

The best sheets ever are microfiber — and you can get them at Costco for $99. Research: we’ve tried Frette, Peacock Alley, Hotel Collections, Williams-Sonoma collections, Ralph Lauren, Matteo, Pratesi, zillion-dollar linen (OK, those I like), and the rest. I spent a year doing a story about Supima cotton and what it means to the universe. (Did you know that Egyptian cotton is not actually as nice as Pima, or Supima, cotton?)

Microfiber is softer than all of the above, and it’s  just starting to catch on. The spa set is already on it: these are the sheets used at Sanctuary, the Boulders, et. al. Comphy makes microfiber sheets that you can order online. Jennifer Adams Home also makes them, and they’re sold during special events at Costco. (The schedule is here.) You can also purchase them from Jennifer online, but then you will pay $415 instead of $99 for the exact same sheets, and who wants to do that? Cindy and I each picked up a new set on a weekend shopping whirlwind that also brought us to the sale at Off 5th Saks Fifth Avenue, which is crazy, and you need to go. Sale items are an additional 50% off, which means that I paid $26 for a cashmere T-shirt that used to cost $150. It’s a perfect basic for fall-winter-spring, also sold in pink and other shades.

Mine is black, natch. This French Connection striped T-shirt was $35. And check out the studly cuffs and hem of my new Michael Kors sheath dress — formerly $250, now $67.

Find an Off 5th Saks Fifth Avenue near you here. The sale ends Aug. 14. P.S. My mom taught me this clever trick: save the clear plastic cases that come with new bedding, and use them to store seldom-used blankets and linens in your linen closet. It keeps the dust off and the just-washed scent in. (I tuck in a dryer sheet for good measure.) Oh — and never buy a duvet insert from Ikea. They seem to made of cotton balls and aren’t sized correctly for standard duvet covers.

That is all. Have you tried microfiber sheets?

Missoni at Target sells out, crashes Target.com, is fashion madness.

***UPDATE As of Wednesday morning, Target.com is back, and there are a few Missoni items left. Get clicking.

Target’s Missoni designer collection touched down this morning, was sold out at many Valley stores within an hour, and even crashed Target.com. As of 3:20 Arizona time, Target’s website was still down.

The Twitter faction is furious. The Missoni make-up brushes were nowhere to be found.  One Valley woman went to four stores before noon.

I joined my fellow Missoni lunatics in line at 7:45 a.m. outside the Phoenix Spectrum Target, where women were talking about “Christmas morning” and how much they loved the Missoni luggage they spotted on TV.

When the doors opened at 8 a.m., the crowd ran inside. The women’s clothing racks were emptied within 10 minutes. I was number 15 in line and got the last of the Missoni bowls.

The beach cruisers went immediately (and two to my girlfriends, who were the envy of the store). The luggage caused a stampede when Target clerks restocked it after 20 minutes. My co-worker Amy nabbed the last black and white suitcase — and the matching travel bag — and walked around with a dazed grin.

And then, about 30 minutes in, the crazed shoppers became friends: we traded and bartered for sought-after items outside dressing rooms and in check-out lines.

There was even a rush on the little girls’ department when one woman emerged in a striped cardigan to oohs and ahhs and shared her secret: “GIRLS! Size XL! It fits!”

(Dear woman: thank you, from us all.)

It was true fashion goodwill, in contrast to the true annoyance of others who slept in 15 minutes and missed out. If you’re on that list, try eBay, where resellers are already hawking Missoni goodies at double and triple the cost.

One suspected eBay buyer piling women’s flats into his cart in my Target this morning got the business from his fellow shoppers for being piggy.

I had a good Missoni day, but I stalked those stripes with dedication: set my alarm for 3:30 a.m. to shop online, woke up every hour just to make sure, and lucked out to get my order in before the crash. (This is sounding quite dire, like a stock market report.) And I hit two Valley stores before 9:30 a.m.

My friend Angela and I were shameless in our lust, even asking fellow shoppers for their cast-offs.We made friends with the fitting room clerks, who told us that this is the nuttiest shopper stampede they’ve ever seen, and then gave us the stuff other women didn’t want. We lurked around the go-back piles. We divided, and conquered, and made loop after loop of the store, trolling for cast-aways, employing every strategem we learned shopping Last Chance.

And then we thanked the shopping karma Gods by sharing cast-offs of our own.

So, I’m a bit tired and a lot nuts. But I have black and white dishes and little girls’ sweater that fits like a dream, so I’ll wear my lunacy with pride.

HOW TO GET SOME OF YOUR OWN: Besides eBay, try the stores tonight, when shoppers who bought with abandon may have returned a few items. Also, follow @TargetStyle on Twitter — the official Target fashionista feed said today that some stores will restock Missoni in the next few days and weeks. Calling the stores first is a good idea — that’s how Angela and I found bike number two. (And thank you, dear bike whisperer at Paradise Valley Tarjay.)

Lastly: call your friends in Iowa/Indiana/Kansas/Missouri. Twitterites in those locales are reporting still-full shelves. 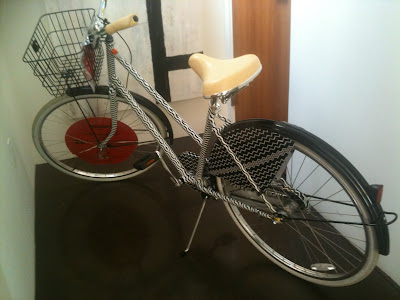 (A friend’s Missoni bike, parked temporarily chez moi, which is a kind of gorgeous torture.)